The student performers walked on stage and took their place behind their drums. The Bellefield auditorium sprung to life with the rhythm of the djembe, a type of African drum. The performers moved and played in unison, with relaxed bodies and smiles on their faces, feeding the room with energy.

The Pitt African Ensemble was originally founded by Willie Anku in 1983, but added drumming, dancing and singing later on. The performance consisted of a drum call and African dances including Yankadi, Macrou and Sinte.

Originally from Guinea in west Africa, Camara became a music director and professor at Pitt’s music department after an opportunity came to him when a woman from the U.S. embassy saw him teaching children how to play drums in his home country. She saw that Camara had a passion and love for music teaching.

“Music means a lot to me. That’s what I’ve been doing all my life, and I love it … As soon as [the kids] get off of school, they come to me, and then we would begin playing,” Camara said. “I started a competition between the girls and the boys. The girls would joke that they were better than the boys. When the lady saw me teaching, she really liked it. She said, ‘Do you like working with kids?’ and I said, ‘Yes.’”

According to Camara, the bonds he forms with his students gives teaching a new meaning. Camara said he emphasizes the importance of his own life lessons, while also inspiring them to find their own voice through music.

“What they learn, the meaning of it, or why they’re doing it and what reason they’re doing it for, they learn all that from me and they can use it on their own,” Camara said. “And in the last couple years, I saw one of my students teaching his own class. I was very happy, and I stopped teaching my class and I ran after him and hugged him. That makes me more happy than anything.”

Student performer Julianna Elliott, a sophomore environmental studies major, said she has taken Camara’s course twice, and has found reasons to keep coming back. Elliott said although she is taking the class again, it is never the same experience.

“It’s always really fun. There’s always new fun things at the last minute. It’s good, we usually do drumming and we learn a few songs and we learn the African history behind them,” Elliott said. “We recently added singing in too, now that we have masks off. Taking it twice, it’s not the same thing each time. It’s always a little bit different.” 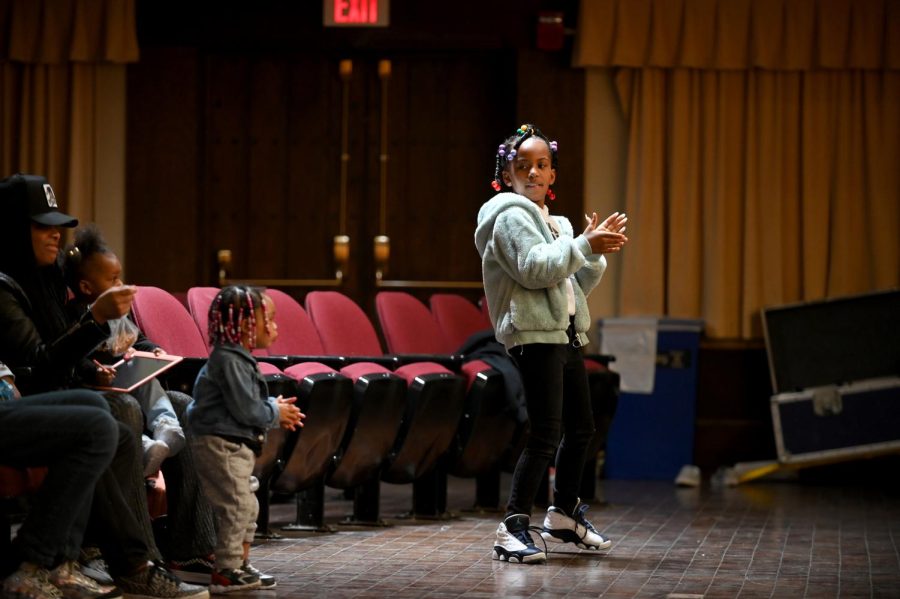 An attendee dances as her family enjoys the Pitt African Music and Dance Ensemble’s concert in Bellefield Hall on Friday.

Diya Arya, a junior music major, said she has also taken the class twice because of the welcoming and fun atmosphere Camara brings to his class and his students.

“We always come back because he really cares about his students, so it’s a really amazing experience to have a professor that cares so much about you and your well-being,” Arya said. “I feel like every class we go to, it’s always a really fun time. Especially being in the class twice now, it’s amazing to really learn the rhymes and properly play the djembe.”

Unlike a traditional performance, Camara brought audience members onstage to dance with the student performers. Audience members learned a three-step move and also had a chance to dance solo on stage. Through audience interaction and participation, Camara wanted the performance to show that music was meant to be shared with the community.

“I loved it. I’ve never been to any sort of drumming ensemble, and because Bella was a participant, she told me about it and we decided to come see,” Enfield said. “My favorite part was the drumming and dancing together. How fast they drum is just amazing. They just looked at each other and gave each other cues.”

Bella’s godmother Teresa Curry, who also came in a show of support, said although she had never been to a drumming ensemble performance, she was engaged through the whole performance.

“The whole thing was engaging, so I can’t pick just one particular moment. They captivated my attention from the very beginning. The whole thing is memorable,” Curry said. “It’s hard not to get into the rhythm of it and enjoy every single moment, whether it be dancing or singing or whatever was involved.”

Arya said music is important not only for the program and its performers, but also the Pitt community as a whole.

“I feel like music in general is really important for the Pitt community because it’s culturally bringing awareness to other genres,” Arya said. “It’s really nice to see Pitt being able to diversify the music scene and bring in new cultural experiences and allowing other people to see them and experience them as well.”

Cannes 2022: the buzz titles from the UK | Features