Century-Old Records in Jeopardy as Cold Blast Takes Aim at South
admin
April 1, 2021
7:43 pm
A shift in the weather pattern is expected to bring an abrupt pause to spring in the southeastern United States.

A shift in the weather pattern is expected to bring an abrupt pause to spring in the southeastern United States. AccuWeather meteorologists warn that a wave of cold air is forecast to send temperatures plummeting across the region, jeopardizing records that date back more than 100 years in some areas while also threatening sensitive vegetation with a frost or freeze.

Winterlike weather brought the North Central states a midweek reality check and is now doing the same in the East. Actual temperatures dipped into the single digits and lower teens Fahrenheit over the northern Plains on Wednesday morning.

Low temperatures in the Southeast are expected to fall well short of frigid levels in the North Central states, but some areas in the South are likely to be hit with a hard freeze on Thursday and Friday nights, according to AccuWeather Senior Meteorologist Brett Anderson.

"Forecast temperatures will be at levels seldom seen this late in the season in the Southeast," Anderson said.

Low temperatures are projected to range from the upper 20s to lower 30s to end this week from Tennessee to the northern parts of Alabama, central Georgia, the coastal areas of the Carolinas, and much of Virginia. Forecasters also expect a freeze to occur in these locations. Farther south, temperatures are forecast to dip into the middle to upper 30s in southern Georgia and northern Florida. The coldest outlying areas in this region may have frost.

Daily record lows that have stood the test of time since the early 1900s and even the 1800s will be challenged. In Greenville/Spartanburg, South Carolina, Friday's record of 26 was set in 1902. In Memphis, Tennessee, the record for April 2 of 27 dates back to 1881. Lows are forecast to be within a few degrees of these marks for the two cities. Records may be challenged, tied, or even broken in dozens of Southern cities late this week and early this weekend. 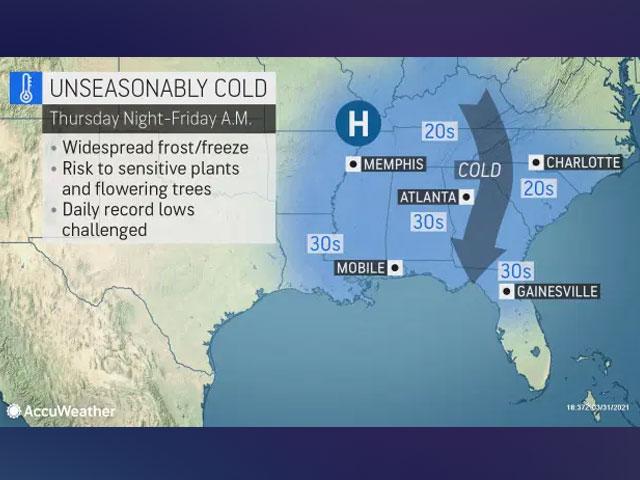 Meteorologists urge people who have set tender annual flower plants outside or started their gardens to take protective and preventative measures.

"Spring growth is likely a week or two ahead of normal across a large portion of the Southeast because of warm weather throughout March," AccuWeather Senior Meteorologist Dave Samuhel said.

"Flowering fruit trees and other sensitive vegetation could be damaged by the cold," Samuhel said. This will not have a big impact on traded commodities like corn and soybeans, which have either not been planted or have not emerged just yet, he added.

Spring blooming occurred earlier than normal across a good portion of the Southeast, according to the National Phenology Network. Northern Georgia, upstate South Carolina, and central and eastern Tennessee had particularly early blooms, including as much as 20 days earlier than normal. 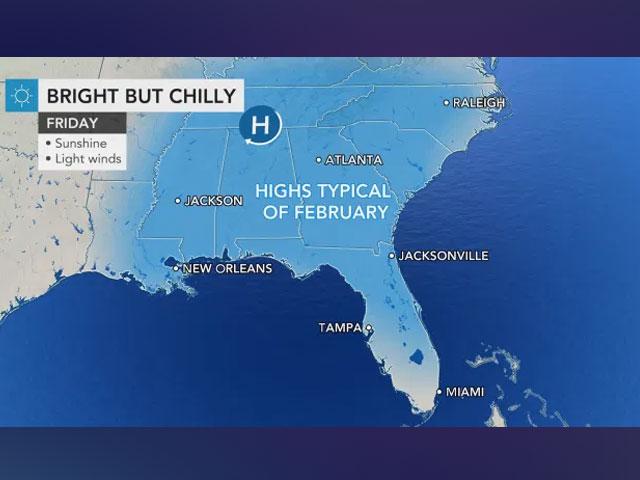 The last time forecast temperatures have dipped into the middle and upper 30s in Jacksonville, Florida, was during early March.

In Tupelo, Mississippi, temperatures most recently dipped to near 30 degrees during the last week of February. That temperature level was right at the tail end of the brutal blast of cold air that caused tremendous damage to the infrastructure over a broad area of the South Central states. During the depths of the frigid air in Tupelo during mid-February, daytime temperatures did not climb above freezing, and nighttime lows were in the teens in the city.

As cold as the mornings will feel in the Southeast late this week, strong April sunshine will try to help ease the chill during the daytime hours. Still, daytime highs will be 10-20 degrees below average for early April. Highs typically range from the lower 60s in the southern Appalachians to the middle 70s along the upper Gulf coast during the first few days of the month. 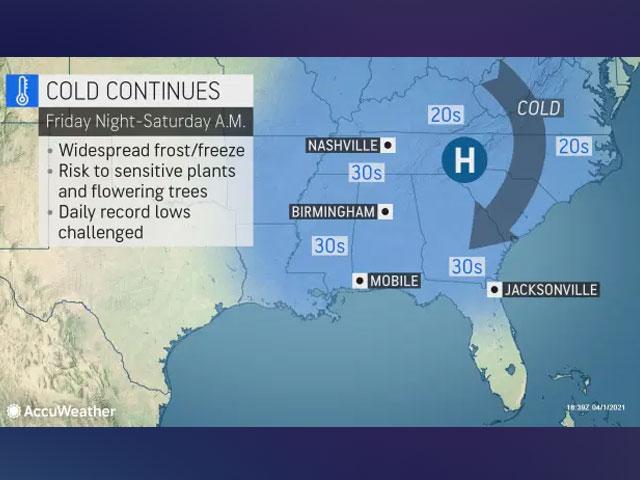 Even though cooler air will spill through the Florida Peninsula late this week and into this weekend, temperatures will stop well short of frosty levels. Departures are forecast to be on par with much of the rest of the Southeast states. Highs are forecast to be in the middle to upper 60s in Orlando, Florida, during Friday and Saturday as opposed to the average high near 80.

In addition, forecasters say it looks like much of the region will be free of rain for nearly a week's time moving forward from Thursday, April 1, to Thursday, April 8, which is good news for those still cleaning up from devastating flooding over the weekend as well as severe weather events throughout March.

Nashville, Tennessee, fell within several hundredths of an inch of breaking its March rainfall record. In March 1975, a record 12.35 inches of rain fell. This March, 12.28 inches of rain fell and which was enough for second place.

Source link
Category : Uncategorized
PreviousThe Reason That I, as a Christian Pastor, Want to Bless the Jewish People
NextIlluminations Alliance: By 2033, The Scriptures Will Be Available in Every Language