Southern States Brace for Rounds of Flooding Downpours, Severe Weather This Week
admin
March 15, 2021
7:16 pm
Wichita, Kansas; Oklahoma City and Tulsa, Oklahoma; and Dallas and Wichita Falls, Texas, are some of the locations where residents

Wichita, Kansas; Oklahoma City and Tulsa, Oklahoma; and Dallas and Wichita Falls, Texas, are some of the locations where residents should make sure cell phones are fully charged and the volume turned up with severe alerts enabled prior to heading to bed.

AccuWeather Global Weather Center – March 15, 2021 –  AccuWeather meteorologists are urging residents from the southern Plains to the Southeast coast to remain weather aware this week as rounds of flooding rainfall and volatile thunderstorms unfold. The pattern could lead to a multi-day outbreak of severe weather, including tornadoes.

The same storm that brought a historic snowfall to the Rockies and High Plains and severe weather to portions of the southern Plains over the weekend will bring rain and thunderstorms to the Ohio and Tennessee valleys at the start of the week.

Locally severe thunderstorms are forecast to erupt on the leading edge of a puddle of cold air located in the upper levels of the atmosphere in central and northern Missouri Monday afternoon and evening. 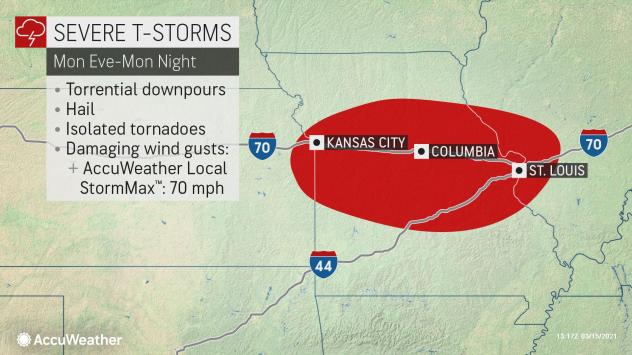 Even though these storms may be isolated in nature, they can bring all facets of severe weather ranging from large hail and damaging wind gusts to a couple of tornadoes. The storms may reach the St. Louis metro area during the evening hours.

The main threat across the Southeast will be areas of downpours that can slow travel and lead to isolated incidents of flash flooding. A few gusty thunderstorms are also possible. 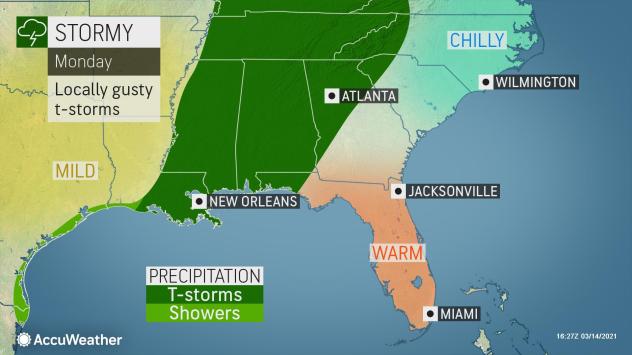 On Tuesday, the storm will stall out over the Southern states, leading to rounds of downpours from Louisiana to the Carolinas throughout the day. Once again, a few storms can become heavy and gusty, and flash flooding will be possible where the heaviest rain persists.

In areas that receive multiple or extended downpours, there can be an AccuWeather Local StormMax™ of 5 inches of rainfall from Monday night to Tuesday night. 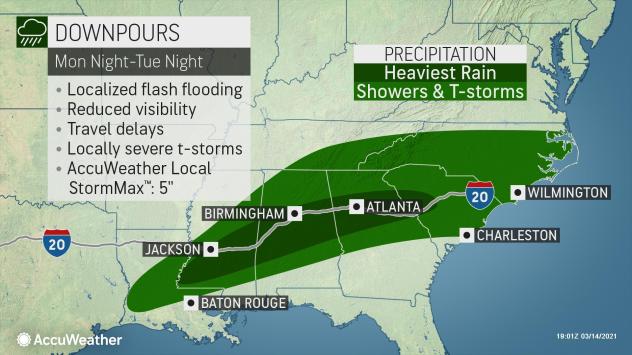 The next chance for widespread severe weather will arrive across the southern Plains late in the day on Tuesday as the storm that moved over the West on Monday emerges from the Rocky Mountains.

Here, the storm will gain strength and tap into warm, moist air from the Gulf of Mexico. As this sticky environment clashes with cooler air following in the wake of the storm, this will help to spark severe weather across the Southern states from Tuesday night through Thursday.

AccuWeather, recognized and documented as the most accurate source of weather forecasts and warnings in the world, has saved tens of thousands of lives, prevented hundreds of thousands of injuries and tens of billions of dollars in property damage. With global headquarters in State College, PA and other offices around the world, AccuWeather serves more than 1.5 billion people daily to help them plan their lives and get more out of their day through digital media properties, such as AccuWeather.com and mobile, as well as radio, television, newspapers, and the national 24/7 AccuWeather Network channel. Additionally, AccuWeather produces and distributes news, weather content, and video for more than 180,000 third-party websites.